By Scott Clark
on September 24, 2009
Introduction and Installation
I’d read some articles and news items about Aptana Studio Pro, and after reading that it was not only a PHP IDE, but also a full-featured scripting language editor, I had to give it a look–after all, it’s free to download, and I’m always looking for a better hammer for my programmer’s toolbox. In this article we’ll take it for a spin and let you know how it worked out!
Aptana Studio Professional, version 1.5, is free to download and use for 30 days. After that it reverts to the more basic Aptana Studio, but the Pro version is $99 for a single installation. After I use it for a while, I may just plunk down the money, because so far I am very impressed with its capabilities.
It’s based on Eclipse (an Open Source IDE project), and also works as a standalone product (which is the version I selected). The installation process was pretty straight forward. After a 128MB download, I followed the dialog boxes and it was installed!
Aptana Studio requires Firefox version 1.5 or greater for JavaScript debugging, which most developers have anyway, (I didn’t), so I downloaded it from a prompt that Aptana provided, installed it, and proceeded with the first trial use of the IDE.
Aptana also enabled me to automatically install some addons that allowed me to me to edit, preview and debug PHP, Ruby on Rails, Python, Server-side Ajax, Adobe Air and other developer technologies including Ajax libraries. After I selected those which I wished to work with (almost all of them), it automatically installed them with no effort on my part. Pretty slick!
It also automatically detected and added the required firewall modifications to my firewall so it could properly work, and that process was seamless as well. So far so good.
Next it allows you to add your own hosting information for uploading and downloading to and from your web host. It has built-in FTP, FTPS and SFTP support in this latest version, which is very useful. No need to use another application while you are working on a project. It also includes support for developing, viewing and debugging applications for use on S60 (mostly Nokia) mobile phones, but since I don’t have any of the listed phones, I declined that option for now. Other options I declined included support for SCM plugins, including GIt, Subversive, P4WSAD and CVS (for version control support). The only other option I declined was hosting support for Cloud computing that is built into the product, as I already have my own web host and don’t really intend to switch hosts just to test out this feature of the Aptana Studio (which they host).
At first glance, I was impressed that the left sidebar of the IDE provided me with links to video tutorials including an Introduction to the Studio, How to Set Up a hosted Rails Server, PHP server, Aptana RadRails Intro and an intro to Aptana PHP. As (British comedian’s Sasha Cohen’s character) Borat said, “very niiiice!” 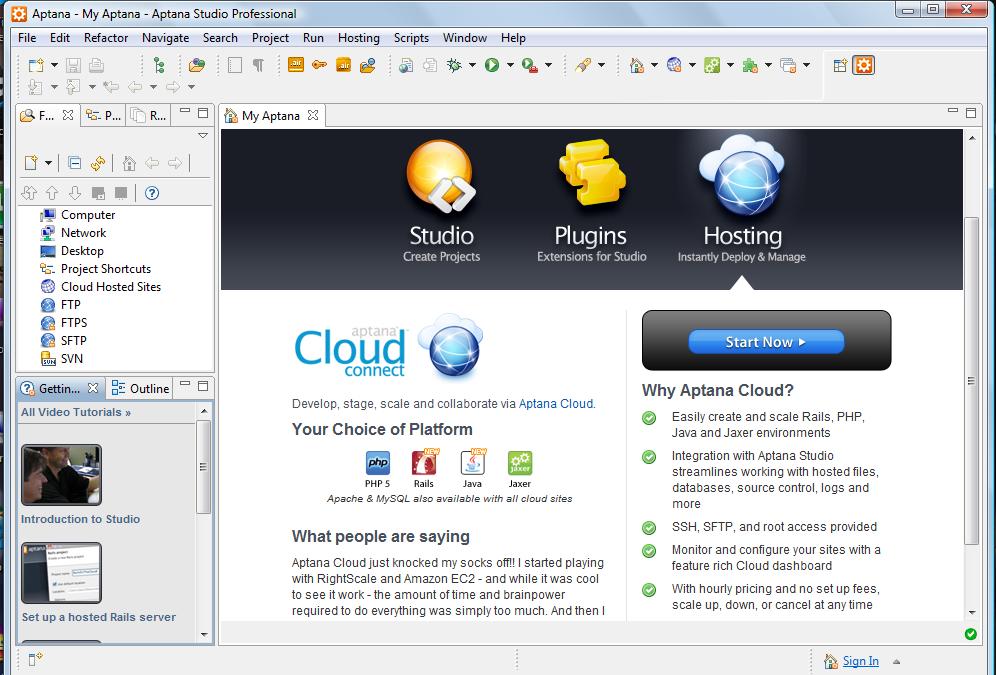 Now before you say, “yeah, great, another PHP editor, just what I need”, you have to recognize that it’s not just a PHP editor. It’s also a CSS, HTML, JavaScript, and with the above-mentioned plugins which support Ruby, Air and Subclipse and more.
I set up the FTP client to provide access to my own personal site, ReptileClan.com, and opened the main index file within the Aptana editor.
Aptana then informed me that I didn’t have Ruby installed on my computer, and offered to install it for me. Okay, sure, I may as well install it, so I clicked the Install Ruby button, and finished the installation procedure. A bit strange, since the domain was just purchased last night and I only have a placeholder index page in place with one graphic and some text. Thus far, at least this time, that installation process was a bust, because there was a failure to launch the “One Click” Ruby installer. I closed all open applications (namely MSIE8 and Outlook Express) except my text editor that I was using to write this article, and Aptana, and retried, and this time it said it was downloading and installing Ruby.
Next Aptana tried to detect where the Ruby installation was, but this was not as easy as it may seem. It searched and searched, and so did I, but I wasn’t able to find it myself, so I tried installing it again through Aptana. Again, no success, so in the spirit of investigation and curiousity, I went to the Ruby site and manually downloaded and installed it (which took about another 15 minutes), then clicked the Back button on Aptana and manually selected the directory where Ruby was installed. Success! Aptana then installed the core Ruby modules, which went fine, and then Ruby gems, at which point it informed me that I did not have the Ruby gems installed. Again, I installed them manually, pointed Aptana to where they were located, and it seemed to be satisfied at this point enough that I could begin to work on my main index page in the HTML editor that is built into Aptana.
1
|
2
Next Page »