By Scott Clark
on September 24, 2009
Unlike previous versions, Aptana Studio Pro includes the ability to instantly preview your work in Firefox, MSIE and Safari–a much needed and requested feature that will put a smile on developer’s faces. There are tabs at the bottom of the editing window that allow you to view the page you are editing in Firefox and MSIE, and to add another browser or browsers. 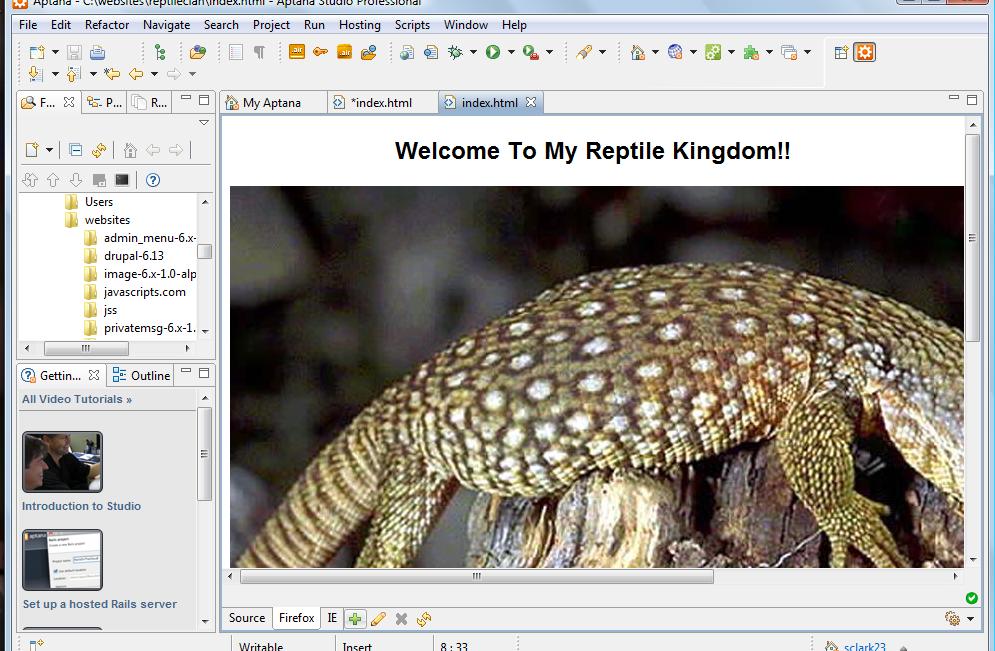 The only issue is that you are editing them, not by choice, in a temporary directory that Aptana creates, and it doesn’t move any images you have on the page to that directory, so unless you reference a complete image URL in your source code, you get a broken image link. Once I changed it to a complete URL I was able to see the images in all their glory within the preview console. A bit of a pain, and perhaps since I’m new with Aptana, there is a more reasonable method of doing so.
There is a small link at the bottom right of the Aptana IDE that says “login”, so naturally I wanted to know what I would be signing into. Creating a login/password enables developers to participate in “online services including Aptana Forums, ASAP bug database, Aptana Cloud, Aptana Studio Pro trial and Aptana Studio Pro nightly update services, all of which require user authentication.” Once you log in, you can access your user profile, get alerts, and access the other services mentioned above. Not that useful thus far, but it’s a nice feature to be built into an IDE!
Creating My First Project
I wanted to do some work on my new site, ReptileClan.com, so I used that as my first project. I clicked the Create a New Project button, and it allowed me to import specific JavaScript libraries for use in the project. Not knowing just exactly what each JS library’s functionality was, I imported those I thought may be of use, and Aptana created the project in my Project Library. It also prompted me to select any Ruby Gems that I may wish to use, so I selected a few to start with and moved on.
I wanted to try out Aptana by doing some editing on a script I had downloaded for my site, ReptileClan.com. I choose a simple MySQL-powered blogging script called eggBlog, from EggBlog.net. The installation required me to create a new MySQL database, edit the config file, then move the files over to my web server. I was able to get it up and running without any problems, and found that it not only enabled me to set up my own blog, but it also allowed other site visitors to create their own accounts and add comments to my blogs, and it also enabled me to create discussion forums and create photo albums. Oh, and it came with several “themes” that enabled me to change the look and feel of the blog site.
Thus far, I really hadn’t even needed to use Aptana except as a text editor to change the config file, but that changed when I needed to dig into the PHP script itself in order to remove a Google ad that was automatically displaying at the top of the page on every page. I located the file that was the culprit, global.php, and opened it in Aptana. 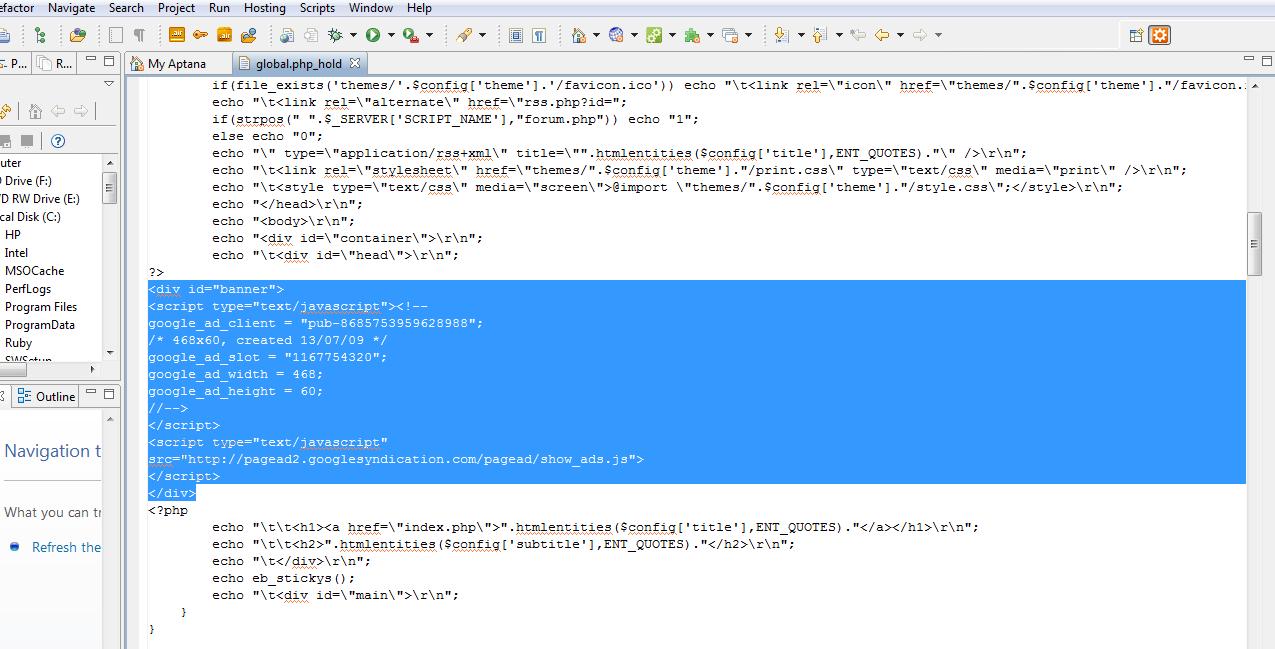 Once I located the Google ad, I simply saved a backup copy, and removed the entire <DIV> tag area and the ad was gone. By doing that, I also pulled up the content area a bit too much, so I added a couple break tags to push it back down, as shown in this screen capture:

That took care of my only issues, thus far anyway. I also edited the header image, added a snake and changed the little sign to say “Reptiles by Nature” using Jasc’s Paint Shop Pro, and then I added some content to the site, including a few forum threads, some photo albums and pictures, and a couple blog entries. My new site was up and running and my work with Aptana is only getting started!
I look forward to working more with Aptana Studio, and this is one of those programs that I won’t mind spending the money to add this tool to my developer’s arsenal. New versions and features are coming out all the time, and the developer community is large, so I don’t see it going away any time soon. Take an hour, download and install it, and give it a try–it’s well worth the effort, and I believe you’ll be using it for editing and developing your PHP (and other) applications going forward. The download is free, and I think you’ll agree with me–and if not, let me know if you found any problems or features that I didn’t mention!
« Previous Page
1
|
2